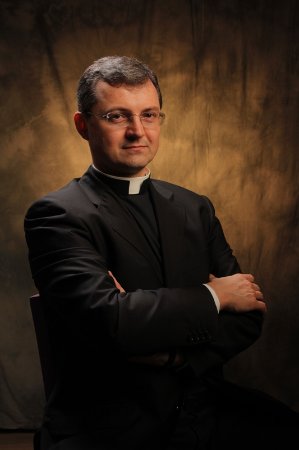 Born in Darłowo (Poland) in 1970, Father Tomasz Trafny completed his studies in philosophy and theology at the Catholic University of Lublin. Ordained priest (in 1996) for the Archdiocese of Lublin, he served as a chaplain in the Hospice for terminally ill patients. He continued his post-graduated studies in philosophy at the Catholic University of Lublin and than at the Pontifical Lateran University in Rome.

From 2006 he serves as the Official of the Pontifical Council for Culture - Head of Science and Faith Department and General Secretary of the Board of Trustees of Science and Faith – STOQ Foundation. He deals with matters related to the cultural analysis of the development of natural sciences, to the dialogue between science and religion, but his interests include also neurocognitive sciences, robotics, bionics, regenerative medicine, new anthropological challenges, environmental and climate change issues. Director of the STOQ Project Research Series and Chairman of the STOQ International Inc.